By Fernando Barros Lirola on 16 marzo, 2017 in Conciertos

Experience Cervantes in a Voice Fernando Barros presents «Don Quixote» in a unique combination of Video, song and lecture.

This song is from Cervantes’ poem, “Bailan las Gitanas,” well before the genesis of flamenco and the identification of the gypsies (gitanos) of Andalusia as an outcast class of society. Ironically, the prevailing romantic ideal of nomadic life is evidenced in this poem because the queen is full of jealousy for the freedom and passion of the gypsy girl. The rhythm of this song is tango (ngo), African in origin, as is the fandango, a style you will hear later. Its melody was originally played on the oud, not the guitar.

Flamenco is a relatively new music genre from the 19th century, springing from the European Romantic movement. It has been highly influenced by the many diverse cultures/musical styles/and instruments of the Mediterranean region. Its initial cultural impact was via the power of the voice, as in all oral traditions, and later was to be marked by three elements: rhythm; melody; harmony.

1. OVERVIEW OF TONIGHT’S PRESENTATION: The Effect of Curiosity

2. We know that evolution has occurred through innate human and animal curiosity which morphs to creative ways of problem solving. In your future you will be required to utilize both of these attributes (curiosity and creativity) in your work, relationships and studies, which we hope will be life-long! Which leads us to explore the relevance of:

3. Relevance of D. Miguel De Cervantes. Known today as the first modern novel and Cervantes as the “man who invented fiction” for its unique presentation of the fantastical mind of a fantastical character – Don Quixote – as he attempts to make real his visions and ideals.  We will present Cervantes’ self portra

it in two artistic forms utilizing his own words.

A. A Self-Portrait in Contemporary Contest: Video

Crippled, graying, with a discernible stutter and almost toothless, Cervantes is self-described  in this edgy, contemporary compliment to Fernando’s composition. The video was created by David Zerep, who graduated last year from the Belles Artes University in Granada,  Spain.

4. Presentation of Quixote in English with Illustrations from our book; our book was one of the first in the 1700’s. It is an ideal example of artistic inspiration and collaboration. The first publication in English was in 1612 for volume 1 and 1620 for volume 2. Original Spanish editions were in 1605 and 1615.

+ Translation by CHARLES JARVIS of England

+  Illustrations: 700 remarkable etchings, some of which are on the screen now, are by TONY JOHANNOT of France

+ As a stellar example of the evolution of language, our title tonight is taken from a word formed from Cervantes’s title: QUIXOTIC – both a verb and an adjective!

The malagueñas were sweet songs hidden and protected for centuries by the muslims in the mountains of southern Spain and serve as inspiration for a form of flamenco dance we know today.

5. “CARDENIO”: An Artistic Metamorphosis with Shakespeare

Surprisingly there was another artistic metamorphosis to be found in the theater of Shakespeare. Not only did Cervantes and Shakespeare die within a day of each other 400 years ago last April, Shakespeare read “Don Quixote” and was inspired (!) to write a play based on one of Cervantes’ characters: Cardenio. This was one of his last six plays, three of which are set on the perilous seas, including “The Tempest” and three are set in magical lands, including “Cardenio,” considered by some to be second only to “Romeo and Juliet as penultimate romantic theater. It is complete with betrayal, manipulation, and entanglements; in the course of the play we are witness to suicide by sword, a ghost rising and speaking, sexual molestation of a corpse, poisoning by a kiss, a royal crowning of a spirit known as the Queen of Silence; and in the end –

FIVE DEAD CHARACTERS ON THE STAGE!

from chapter 23 of Don Quixote

6. “ALTISIDORA” a very long poem en chapters 44-46. It features a caballero (our hero!), who overhears the desires of Altisidora and thinks the longing is about him! Alas, his heart belongs to Dulcinea, but he sees himself as a joven and, therefore, naturally desirable (!) who wants to be the object of affection. Altisidora, of course, is not seeing him this way and wants only to be the object of a different suitor’s desire. A comical turn true to our hero’s delusions. It is presented in guajiras and tango styles and will be followed by the “Tangos de Granada.”

7. “Epitaph of Don Quixote and Dulcinea” – As you have observed , Carlos has changed instruments throughout our presentation, based on Fernando’s compositions or the era from which a melody originated.  He is inventing a new method whereby he is adapting flamenco for the oud. Our simple overview of “Don Quixote” ends with an ancient Sephardic lullaby (a durme), which evolves into flamenco style.

8. Thank you to DON ANASTASIO SANCHEZ ZAMORANO of the Instituto Cervantes and to the staff of the National Hispanic Cultural Center for hosting us tonight!

From Ken Robinson, himself a British, a tilting-at-windmills educative revolutionary, here is a little story about perception, creativity and curiosity: tell anecdote of the little girl drawing a picture of God. We end with the “Tangos Bailan las Gitanas.” 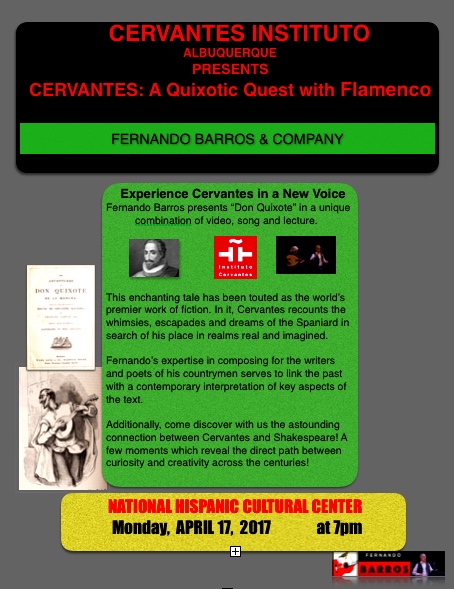